skip to main | skip to sidebar

I'm getting really excited for ALT Summit next week!  I'll be speaking on the Blog to Shop panel with three very talented ladies (Mackenzie, Piper & Janette) and with what we have to share, it is sure to be a talk you will not want to miss! If you can't be at ALT, there will be a recap on the blog, so you won't miss out entirely.
Besides planning to speak on the ins and outs of running an online shop, I've been busy putting together some outfits for the weekend.  One of the parties is going to have a Clue theme and I'm going as "Mr. Green."  I found these shoes at H&M last week and I'm coordinating around them.  I got to thinking about the suede like fabric on these and how I didn't want them to get scuffed in bag, so I decided to take an old pillow case and make some nifty shoe bags.

This is a simple project.
Just slide each shoe in it's own bag to keep it protected and pack them into your luggage.
Posted by Beth at 8:33 PM 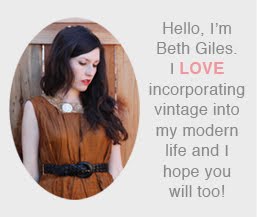 All content is property of Salvage Life.
Salvage Life is a Registered Trademark.